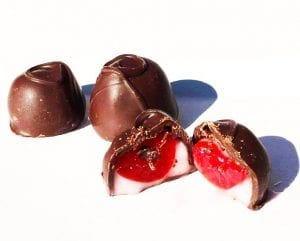 One of our favorite candy-makers sent us a truly delicious candy he agreed to make just for us: the cherry cordial. The cordial is jollier than the truffle with its relatively round chocolate exterior, its distinctive runny center, and deliciously sweet cherry nugget at the center.

So, naturally, that got me thinking: who thought to put the cherry in the center of the chocolate? Why not just a good-old plain cherry? And why all the fuss involved in making it a maraschino cherry? So, after a little exploring I found that – like so much in the candy kingdom – the story of the cherry cordial goes back to ancient apothecaries. 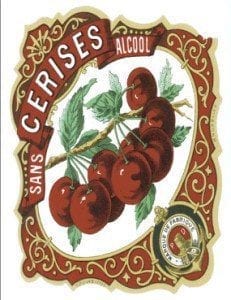 Here’s what happened: In the 1400s, Europeans were drinking a distilled beverage called “cordials” used to “invigorate the heart and revitalise the spirits,” according to British food researcher Ivan Day.  These drinks were undoubtedly for the well-to-do given that some even contained flecks of gold, yes actual gold, that were thought to renew the body’s heat and free it from diseases.

Gradually, the cordials became renowned as a recreational drink, helped by their reputation as an aphrodisiac. One example, is the Rosolio, which was “Distilled over large quantities of the insectivorous bog plant sundew…and included hot provocative spices like cubebs, grains of paradise and galingale,” writes Day, adding that seventeenth century medical writer William Salmon, claimed the sundew “stirs up lust”.

So how did this multipurpose beverage become the cherry cordial of today? Accoding to a fascinating piece in CandyFavories.com the road here is little windy starting in France in the 1700s. There, confectioners made a tasty sweet of chocolate covered sour cherries. By the time these candies reached the U.S., where they became mass-manufactured in the mid-1800s, confectioners were soaking the cherry in alcohol…ie cordials. Gradually, the alcohol faded away and the cherry cordial was, essentially, cordial-less. 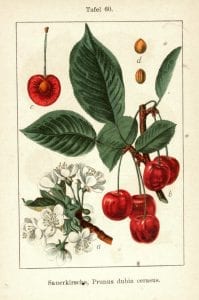 As for the maraschino cherry? The answer goes back, at least in part, to the U.S. government. According to Alan Davidson, author of the Oxford Companion to Food (Oxford University Press, 1999) the cherry itself goes back to Dalmatia (now in Croatia), where, no surprise, it was used for a liqueur, which is still made in Italy.

The maraschino cherry became our bright and emboldened maraschino in the 1920s with the help of Dr. Ernest Wiegand, who founded the schools food science department. In 1928, he developed a process for manufacturing the maraschino cherries into their present (more or less) state in 1928 to address a problem due to a surplus of cherries.

Travel through history when you peruse our online store.