Home / Blog / Uncategorized / Who Is That Stately Man?

Who Is That Stately Man?

Who is this stately man? You’ve know about him since you were a kid. He plays a part, one way or another, in your life. And he has a strange, unlikely, connection to a favorite penny candy. 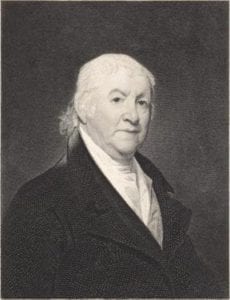 The stately man is none other than Paul Revere. You probably didn’t think he looked like that, right? More likely dashingly lean with a flowing ponytail. But Revere was so much more than that: he was a gold and silversmith, who created surgical instruments, replaced missing teeth, and engraved copper plates that reflect history with precision. Eventually, Revere became a successful industrialist, as well.

As for that penny candy: That would be the Mary Jane. Once made by NECCO, now in a newer, slimmer form, the Mary Jane was originally made in 1914 by Charles Miller who, like his father, made candy in the basement of his house… where Paul Revere once lived. Mary Jane, now well-over 100, still wears the same dress and shoes and bears a startling resemblance to the Mary Jane of the Buster Brown cartoon. The resemblance is so clear Buster Brown creator Richard Outcault sued Miller for copyright infringement, but lost.

Want something more 1700s?  See our selection of sweets the Colonists really ate.