The First Pop and Blam of Bubblegum!

When you think of bubblegum, I’ll bet 10,000 gum balls the Fleer brothers don’t enter your mind. But the Fleer brothers started it all. The story begins when Philadelphia native Frank Fleer, born in 1860, joined and later took over his father-in-law’s flavor extracts company. Fleer was in good company: his father-in-law was a Quaker, one of the oldest, most influential, and ethical players in candy history. Within five years Fleer began making chewing gum, some of which he sold in vending machines in the lobby of buildings.

One of the Fleer company’s most impressive accomplishments was created by Frank’s brother, Henry. He added a candy coating to pieces of chicle – a process known as “panning” that dates 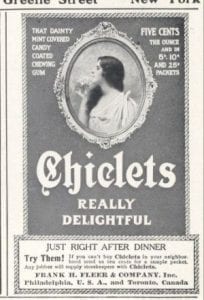 Look Who Made this Classic!

back to the 16th century “sugar plums” and is responsible for such treats as the jelly bean, Jaw Breaker, and Fireball. He called the pieces “chiclets” and the Chiclet we all know was born. Surprised? Most people think the Chiclet was an Adams gum from the get-go (think: “Adams” on the Chiclet boxes). Actually, the Fleers sold the Chiclet to Sen-Sen and, ultimately, to the American Chicle Company, of which Thomas Adams was a part. 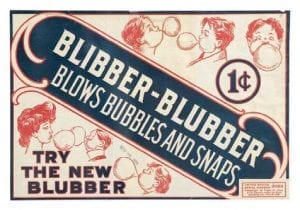 As part of the deal, the Fleer gum company could continue making chewing gum, only the gum couldn’t contain the critical component, chicle. Three years before, Frank had experimented with doing something the big three of the early gum universe – Wrigley, The American Chicle Company, and Beech-Nut – had not attempted: make a gum that could blow bubbles. He succeeded, using natural rubber latex, and launched the first bubble gum ever, called Blibber-Blubber. Shortly after, the Blibber-Blubber bubble popped. The texture was grainy and broke apart and the bubbles were hard to make. Worse, the gum adhered to skin with the ferocity of superglue. By the time Fleer sold his business to American Chicle in 1909, he didn’t have much to do.

But in 1913, Frank Fleer rose again, this time with the Frank H. Fleer Corporation in Philadelphia. The company made candy and trading cards featuring such celebrities as Babe Ruth, Gloria Swanson, and Mary Pickford. All the while, the pursuit of bubble gum continued, even after Fleer retired and his son-in-law Gilbert Mustin took over the business.

During the late 1920s, the company’s cost accountant, 23 year-old William Diemer would sneak into the lab after hours and play around with the bubblegum recipe. He wasn’t a cook, chemist or scientist and didn’t aspire to any of these things. What drove him was probably curiosity mixed with a sense of adventure. Numerous batches failed until finally, he got it right. Well, almost right. The gum didn’t stick and he could blow bubbles, but not if he let the gum sit overnight. In 1928, after more fiddling, Diemer figured it out, and added pink dye, the only coloring he could find in the lab. That’s why bubblegum is pink to this day. 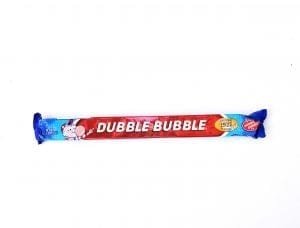 The Dubble Bubble has lived a long and fruitful life ever since, even appearing in the rations of GIs during World War II. It rose above competition from Topps, who made Bazooka just before the War and took off in the ‘50s, and Baloney made by the Bowman Company of Brooklyn New York, an early maker of trading cards. Today, Marvel Entertainment Group produces 15 million pieces a day. As for Frank Fleer – he died in 1921 and never lived to see his bubble gum succeed. William Diemer never trademarked his invention, never invented new confections, and never left the company. Instead, he became a senior executive and had a career which his wife said, after his death in 1998, was happy.