I’ve been thinking about peppermint patties these days, although I’m not sure why. Maybe because peppermint and chocolate, individually or combined, is big on Christmas, Valentine’s Day, Mother’s Day…face it, there’s always a holiday nearby where candy is concerned and chocolate covered peppermints are standard fare.

The year was 1940. At that time, chocolate covered caramels, bonbons, and others along that line were old hat: suitors had been giving their intendeds chocolates for decades. But the chocolate covered peppermint languished… the peppermint was soft and gummy and the candy overall substandard. But Pennsylvania native and ice cream cone maker Henry C. Kessler changed all that. figured out a way to make the center crisp, firm and delicious. He named the new creation the “York Peppermint Pattie”. Soon, Kessler was selling the treat throughout the Northeast, Florida, and places in-between. In fact, the Pattie became so popular Kessler gave up his ice cream cone business and focused exclusively on that.

As luck and business norms would have it, other companies jumped on the Peppermint Pattie bandwagon, including James O. Welch. In 1949, in Cambridge Mass, he developed a smaller version of the iconic sweet called the Junior Miss. Welch was no light-weight in the candy world: a native of North Carolina, he started his company in 1927 and went on to manufacture such iconic candies as the Milk Duds, Sugar Babies and Sugar Daddies, according to the Cambridge Historical Society. His brother, Robert, started his own company called the Oxford Candy Company. After it went belly up in the Depression, Robert joined his brother only to leave in 1956 and co-found the John Birch Society. 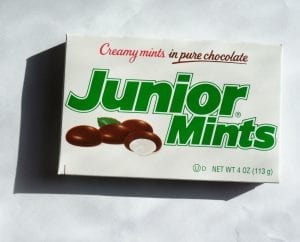 As for the Junior Mints: the candy was named for Junior Miss a popular book written by Sally Benson in the1940s. It was serialized in the New Yorker and went on to become a Broadway hit and Shirley Temple radio production. The Junior Mints, which were small enough to navigate in the dark, became a movie theater favorite.

Today, current owner Tootsie Roll Industries produces more than 15 million Junior Mints a day in Cambridge. As for Kessler’s York Peppermint Pattie? After a number of corporate owners, it is now manufactured by Hershey in Mexico.