The Remarkable Life and Times of the Jelly Bean 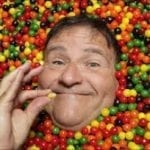 The story of the  jelly bean is remarkable, spanning cultures and centuries, involving sultans and ancient apothecaries, wars and great literary figures. It began around 226-652 CE in the Persian Empire where the ruling power, the Sasanids, enjoyed a sweet called “abhisa” made of honey, fruit syrups, and starch.  By the 9th century, it appeared in the Arab apothecaries as a remedy for sore throats called “rahat ul-hulküm,” later shortened to “lokum,” meaning “throats ease” which many still use today. The sweet had a more or less humble life until the 1750’s when Sultan Abdul Hamid I fell in love…

The First Pop and Blam of Bubblegum!

When you think of bubblegum, I’ll bet 10,000 gum balls the Fleer brothers don’t enter your mind. But the Fleer brothers started it all. The story begins when Philadelphia native Frank Fleer, born in 1860, joined and later took over his father-in-law’s flavor extracts company. Fleer was in good company: his father-in-law was a Quaker, one of the oldest, most influential, and ethical players in candy history. Within five years Fleer began making chewing gum, some of which he sold in vending machines in the lobby of buildings. One of the Fleer company’s most impressive accomplishments was created by Frank’s…

How the Chewing Gum Saved Baby Food and Possibly Ham

The Quick Clean Story of Dentyne

This familiar gum was invented by pharmacist. Franklin V.Canning in New York in 1899. The name stood for “Dental Hygiene” and Canning was the first, since the Aztecs, anyway, to position gum as a breath freshener. Canning’s tagline was: “To prevent decay, To sweeten the breath, To keep teeth white.” “Taste the tingle” is new – demonstrates the transition of gum from something that is purposeful to something that creates an experience.

I’ve been traveling around the country, north and south, on my endless search for historic candy. To the north, I went to farmland in Pennsylvania where I passed the most astonishing vistas of farmhouses and fields…just stunning. A while back, I was in that same area where I found a group of women baking in a Mennonite farm/bakery. I asked if they knew anything about sauerkraut candy: it originated in Germany and is made with actual sauerkraut.  They didn’t – and thought the whole idea was pretty funny. Would they be willing to try a batch? I had the original recipe….