Home / Blog / Uncategorized / The Story of Hate and Love

The Story of Hate and Love

Throughout my career as a candy researcher, I have encountered much love – candy that grandparents gave to grandchildren, parents gave to their kids, lovers gave to each other. I’ve also encountered hate through the realities of the displacement of Naive Americans, the enslavement of African Americans, and the horrors of the spice trade, to name a few. These were no economic activities – they were rooted in a hate that makes the most egregious activities  commonplace. So, when I confronted hate in my hometown of Shepherdstown, West Virginia I expected the community to rise up against it. Yet, that didn’t happened. I wrote an article about the response that was recently published in the Spirit of Jefferson. I have attached it here. 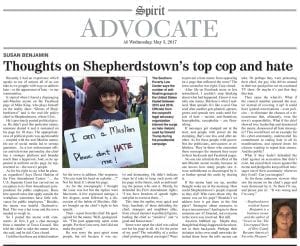