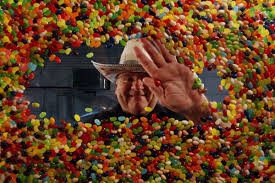 In the summer of 1952, when I was 6 years old, I started David Klein. John Rogers. Associated Press.working at the liquor store my grandparents owned with my Aunt Ida. It was called “Lazy Bee Liquor” on the corners of Kester and Burbank Blvd in Van Nuys, California. The clientele was actively involved in the movie business: acting, producing and writing. A lot of movie stars were living around it…Lucille Ball, Desi Arnaz, Tony Dow from “Leave it to Beaver.” Annette Funicello’s father owned the Union 76 Gas Station right next door.

My grandparents were immigrants from Russia. They were hard-working people who lived in a duplex about half a block away so they could walk to work …my grandfather never got his license. I lived a few blocks away, and walked to the store every morning and my aunt walked me home later in the day.

As part of my duties, I went with my Aunt Ida to a candy wholesaler called Smart and Final to select candy for the store. My aunt was about 4 ft 8 and loaded with energy. My dad called her “Little Caesar” because she was always telling people what to do. Most people use to call her “Shorty.” She never married and only went on one date. And the man tried to borrow money from her. On the first date. Can you believe that?

So, here’s what I remember: At the warehouse we looked through the candy. Let’s say you wanted to taste a sample like a Look bar, remember those? They retailed for a nickel. You could open the box, put a nickel in and taste a bar. If you liked it, you got the whole box. If not, you left the nickel there to let whoever did get the box start with a sale. And that’s what you did. It wouldn’t be like that today.

We brought the candy back to the store and I would fill up the display case. As I filled it, I would look at the wrapper to see where they came from… I became an expert in candy…in Junior High if anyone wanted to know where their candy came from, I could tell them. I knew about liquor, too. I knew what a fifth of whiskey meant. Hardly anyone else did. Hardly anyone knows today.

When I was 18, five years after the liquor store closed, I went into a popcorn and caramel corn business called “Big Dave’s” with my uncle Earl, Ida’s brother, who we called “Itchy.” We made no money. It just wasn’t profitable. Later, I went into the candy and nut business. At first, I just focused on walnuts… and brought in millions after only three months.

One and a half years later, I came up with the idea for Jelly Belly. Instead of just having the flavor in the shell, my idea was to infuse the entire bean with new and unusual flavors.  I thought up the name “JelIy Belly” when I was watching “Stanford and Sons,” you remember that show, right? They were talking about Lead Belly. I didn’t know who Lead Belly was…If I knew he was in jail for murder, I may not have used the name.

I approached The Herman Goelitz Candy Company and asked them to be my contract manufacturer. And that’s what they were. At first the jelly bean was a flop. Then I got the Associated Press to write an article about it and they really took off!  The Goelitz Company bought me out four years later, including the trademark for the name. I can’t use the name and I couldn’t compete with jelly beans for 20 years.

ature Beyond Gourmet Jelly Beans]. They’re different: they’re delicious and all-natural. And my company, “Can You Imagine That!” won The Most Innovative Product Award for Farts® Candy which I developed with Leaf Brands. I’m also working on a project that raises money through candy sales to send kids with cancer to summer camp. I’m proud of that the most.

A movie “Candy Man: The David Klein Story” including David’s bitter-sweet experience with Jelly Belly, is available online and through Amazon. 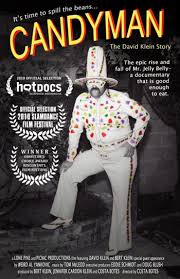