July 4th is fast approaching and we Americans toast marshmallows, set off fireworks, and have an overall great time honoring the founders of our nation. True Treats Historic Candy is right onboard, ready to celebrate the brave, difficult and enduring contributions of our forefathers and mothers like nobody’s business!

So, as proprietors of a candy store, it makes sense that we’d focus on those who devoted their lives to cane sugar – a powerful force in the economy and diets of early Americans. I am speaking, of course, of the enslaved workers, without whose efforts our nation may never have been.

Only…words are harder to find than a well-meaning American might think.  For example, we call these workers “slaves,” which isn’t exactly right. They didn’t choose to be slaves, slavery wasn’t in their blood, like, say, being British or a colonist. They were “enslaved” – a condition forced on them by… British colonists.

As for their resilience, strength, and other distinguishable attributes? The usual description involves some variation of “victim” – all about cowering and capitulation. “Survivors” would be better but that raises another question. They were surviving inequities at the hands of who, exactly? Their “masters”? Masters at what? An artist is a master of their craft. A wise teacher is a master who passes down a skill. But “masters” of enslaved people? A more accurate term would be “slaveholder” or maybe “abusers,” although in historic circles that probably wouldn’t fly.

The plot thickens when hard-working enslaved adults are relegated to defiant kids in such expressions as the “masters punished” rather than the more realistic “brutalized” or “exacted their revenge.” Then there’s that “ran-away” business, first used by slaveholders eager to catch workers who actually didn’t “run-away” but “escaped”. And plenty of them were victorious or, in the parlance of the Revolutionary War, they won.

So, this July 4th, let’s celebrate all the founders of our nation in words that describe who they really were and why we should honor them. 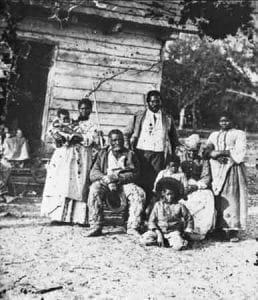