How the Chewing Gum Saved Baby Food and Possibly Ham

Bartlett Arkell was born into a prominent family in 1862. His father was a publisher and state senator, and Arkell carried on the tradition as an editor for 11 years. He left to co-found The Imperial Packing Co, which produced packaging for hams, bacon and lard. No doubt he had help from his friend and mentor, bacon baron Arthur Armour.

Soon Arkell became company president, and under his direction the company excelled. After a friend said the name “Imperial” was ill-suited for an American ham, he changed it to Beech-Nut conjuring images of the American tree and the smoky flavor of his hams. He pioneered the use of glass and vacuum-packed containers and branched the company into everything from peanut butter to soup. Around 1910, Arkell’s brother-in-law, whose own brother helped start the American Chicle Company, suggested that Beech-Nut enter the chewing gum arena. So, they did.

As a person, Arkell was a devote patron of the arts, active supporter of the Canajoharie, New York community where he lived, and a great employer, giving his turn-of-century employees health benefits, pensions, and bonuses. And, like all success in the chewing gum world, Arkell was also a stealth marketer. Among his stints, he hired a traveling circus to showcase his candy and gum and created the personas of the convincingly attractive “Beech-Nut Girls”. 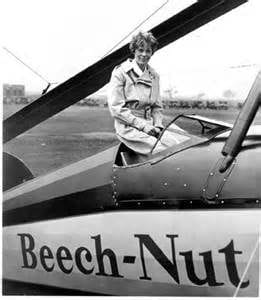 Earhart on the Beech-Nut Plane

But the pièce de résistance was when he contracted Amelia Earhart to fly a plane brandishing the Beech-Nut name from New Jersey to Oakland and back. With funding made possible from the publicity from this flight, and additional support from Beech-Nut, Earhart was able to fly from New York to Europe in 1932 and Hawaii to California in 1935 and embark on the around-the-world flight in 1937 that was her end.

Eventually, Beech-Nut became one of the three biggest gum companies in the nation, along with the American Chicle Company and Wrigley’s Gum. During the Depression, when Beech-Nut’s food profits faltered, the chewing gum kept them alive, accounting for $11 of the $18 million in profits that year. In 1931 they introduced strained baby food which they are most known for today. 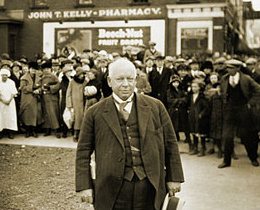