Halloween candy entered the American food scene in the late 1800s, the hey-day of themed parties and flirtations with decadence. The candy appeared in more of a drizzle than a rush, with nary a sign of the M&M, candy bars, candy corn or the other sugary-sweet classics that would follow.

In fact, those early Halloween foods were more-or-less of a bridge between the modern treats and the ancient foods, when today’s Halloween was a harvest ritual and observance of the departed, prompted by the wintry specter of death. 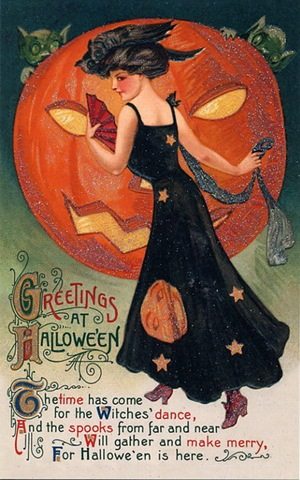 Typical turn-of-century fare included nuts, chestnuts, peanuts, and walnuts, reminiscent of the Scottish and English “Nut Crack Night.” Newspaper ads of the times also featured such Halloween delights as grapes and apples: apples, in particular, were standard Celtic fare in such sweet creations as “fadge,” AKA potato cakes.

Others ads advertised dates and figs, all in keeping with the Jewish High Holidays,celebrating the New Year while honoring the dead, and the following Sukkut, a harvest festival. As for the Aztecs and others, they had the Great Feast of the Dead.

When it came to sweets, turn-of-century revelers enjoyed marshmallows of all kinds, from chocolate covered to plain old naked, as well as and almonds in a variety of guises, such as the Jorden almond, glace almonds, and almond toffee, among a few others.

The almonds remind me that Halloween was also a celebration of rebirth and the living: for millenniums, almonds have symbolized sweet beginnings, as the almond tree is the first to flower in spring.