The dandelion, so remarkable, unforgettable, and essential. Plus… so loathsome to Americans, they invented a specially crafted hand tool to extract it. But time presents a non-loathsome reality: the dandelion is  a venerable flower admired since antiquity.  The ancient Chinese used it for food and medicine; the Japanese cultivated 200 varieties; the Greeks used it as a celebratory gift in their mythology; and monks planted it in the psychic garden of monasteries during the Middle Ages.

The dandelion’s geographic range was vast…but not in North America. It took the Puritans to plant dandelion seeds carried from Europe; in the new land they had a ready spot in settlers’ gardens. The Dutch, Germans, French and other immigrants who followed later planted dandelions as well. The plant eventually broke free of  garden walls and fences, traveling across North America from clearing to clearing, following the trail cast by lumberjacks through mountains,  sprouting freely across prairies.

Apaches ate the dandelion as a green; Pioneers picked it in their Westward travels; the Irish of Appalachia cooked it into a jam; soldiers and Southerners during the Civil War relied on it for medicine and drink; and the health department touted the value of the dandelion to folks at home during World War I.

Even more, the dandelion is the perfect food for bees and other insects with its bountiful pollen and long flowering season. Every part is useful from petal to root and is so rich in deep soil nutrients, it’s even perfect for the compost heap.

Today, the dandelion is gradually regaining its status as the remarkable plant that it is, making an appearance in health food store grocery departments, teas, and holistic medicines. Soon it may even gain stature in backyard gardens where they began.

Some health values of dandelions:

Then there’s gout, rheumatoid arthritis, acne, eczema, and psoriasis. Seems dandelions can help with all of them.

So, are dandelions truly a panacea for all that ails you? I’m no doctor, but with all these proclaimed (and historically significant)  advantages, plus their environmental upsides, why pull? 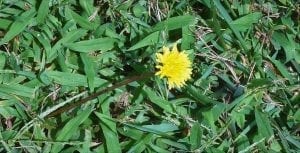 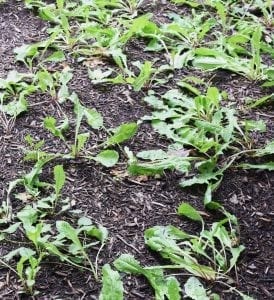 Dandelion Patch in My Front Yard 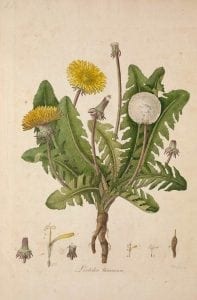