The Chocolate Tasters Have Spoken!

And the winner is….Hostess Mints! 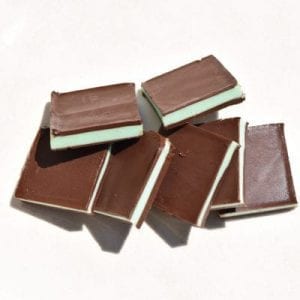 classic treat with chocolate enrobed or sandwiched mint. and a favorite of bridge players from the 1920s through 1950s… Among the positive reviews were that the hostess mint was “GREAT! Much better than the Andes mints I’ve had before…” and that “Hostess mints were the classic mint/chocolate with a good mouth feel.” Another taster put it quite elegantly: Just lovely.  Really liked these,” and another simply said:  “Delicious.”

Our take-away: They’re a keeper!

2 Wilbur Buds. Made in the late 19th century, they were the model Hershey used for making the Kiss. The Bud now uses Daniel Peters’ chocolate – Peters is the Swiss chocolatier who invented milk chocolate with help from his neighbor – Henri Nestle. We carry these already and they’re a hit; in fact, people order them online and contact us specifically to see if we have them. Of course, 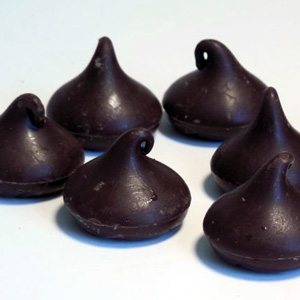 not everyone will be a fan and it’s always interesting to hear other opinions!

Here is what the tasters thought: “I love the Wilbur buds- the texture is fantastic, as well as the creamy milk chocolate…” and “Overall, I’d say my favorite was the Wilbur buds- I am partial to milk chocolate, but the texture is what really pulled me to them.” One taster told us:: “I was excited to see the Wilbur Buds in the package. Last winter, Hershey Kisses had a manufacturing issue, where the tips were broken. Bakers around the world were upset, as holiday cookies were not perfect. Several bakers switched to Wilbur Buds, but I couldn’t find any locally. I was impressed by the quality of the chocolate, and will definitely look for these!” One taster wanted more: “Wilbur Buds — smooth – really enjoyed these – are there larger versions?” Not as far as I know. The lone descent was: “Wilbur Buds are the classic watery American chocolate.” We welcome all opinions and this was a good one!

Our take-away: We love the Buds and have them in milk and dark. They’re a favorite at our Talks and Tastings series. But, we will remind customers that tastes vary and this chocolate will not be a favorite of everyone.

3. Cordials – Irish Cream and Peach Brandy. If not the highest-rated candy, the history of the cordial is definitely the most intriguing. Originating in Renaissance-period apothecaries, the cordial was an alcohol-based medicine made with fermented fruits, spices, and herbs that helped stimulate the heart and improve circulation. The cordial came to signify a fruit-based beverage, a liqueur, and, eventually, a kind of tempting sweet, where a cherry was tucked into a chocolate shell. No alcohol was involved (but the feel-good effect may have been the same!). Today, some

chocolatiers stretch the word “cordial” to include all kinds of alcohol-tasting centers.

We offered our tasters two kinds of cordials – Irish Cream and Peach Brandy. Said one taster,  “While I’m not usually a fan of Irish Creme, these were delightful!” Another said, “Really like the Irish cream; an interesting crunch to the shell.  The Peach brandy was yummy and had a nice crunch to it as well.  Is it real alcohol or flavoring?  The taste of the alcohol was quite accurate.” Another taster said: “The cordials are my favorite. I would have liked them better with a creamier chocolate but I have a thing about that. I enjoyed the flavor of the cordial with the chocolate.

Our favorite critique was definitely this one – truly visceral and experiential: “The Peach Brandy Cordials. Definitely not what I was expecting! I bit into the first one, and was amazed as the brandy center poured over my tongue. As I enjoyed it, I realized that there was a crisp inner shell that had separated the liquid from the chocolate….The Irish Cream was very deliberately allowed to melt in my mouth, revealing the crisp sugar shell …. Both ways of eating this candy were exquisitely enjoyable, and I would need many many more samples to decide which way is my favorite way to eat them!”

Our take-away: The Irish Creams stay…we’ll consider the Peach Brandy for later.

4. Cayenne Pepper Savouries. A natural fit – the cayenne pepper and the chocolate were both eaten by the indigenous people of Central America and the Southwest. Thousands of years later, they appeared in this modern sweet, the union of two foods the ancients would never have imaged. The reviews were basically positive, depending on whether the taster liked Cayenne pepper. “The cayenne pepper chocolates were very intriguing! Just the right amount of spice, so I enjoyed that.”  Along the same lines, we see: “I started with the Cayenne Pepper Savories. The rich chocolate flavor pulls you in, and then the heat kicks in. Not so unbearable as to be unpleasant, but it begs to be taken seriously. These are a real favorite for me!!!”

Others were less inclined: Cayenne pepper would have been better with creamier chocolate. I was surprised at the crunchiness. It was a fun change, though, like the Mexican candies I remember,”  and a non-pepper taster dutifully tried the chocolate, but it was a no-go: “Not at all a fan of spicy chocolates; I did try one; but would not buy them.” For the record,  we at True Treats had an informal Cayenne Pepper tasting and the results were the same. Love cayenne, love the chocolate.

Our take-away: The cayenne pepper is a relatively new candy flavoring…albeit an old spice. So why not? People like them and they add a new dimension to the chocolate line and they date back to the Native Americans. 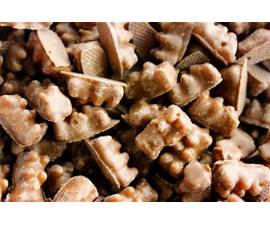 5. Chocolate covered gummy candies. Gummy candy, circa 1920s, are based on the ancient Turkish delight.  German-made, they were originally called “Rubber Candy” for the texture. The German word for “rubber” is “gummi.” The chocolate covered Turkish delight has long been a hit in most places (especially England), so the chocolate-covered gummy bear seemed like a natural extension. But the reviews were mixed.  The thumbs up tasters said: “These were delightful! The gummi bears were fresh under the coating of chocolate, and I found myself devouring the entire sample in short order,” and “The chocolate was less intense than that in the Cayenne savories, but still rich. Another winner!” Then the opinions started to wan. “The chocolate gummy bears were very strange, but they tasted good! I think kids would love them…” then, “Okay, just not a fan of gummies,” and leaving off with: “Chocolate gummy bears were not my favorite. They reminded me of the jellied chocolates that get left in the box because nobody like them.”

Our take-away: We don’t carry the chocolate-covered gummies now and probably won’t. Not enough enthusiasm. 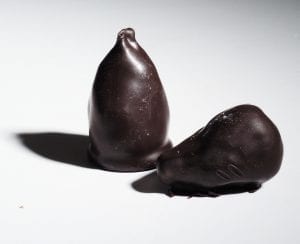 6. Chocolate Fig. The fig has it all! It’s an ancient fruit, rich in symbolism, a favorite of the Colonists, and now thrives in North America.  Knowing that chocolatiers of the late 19th and 2oth centuries coated all sorts of fruits and nuts in chocolate, we figured why not… The feedback was a mixed bag. “The chocolate fig was DIVINE- I love figs- so coating it in chocolate was fantastic,” said one taster and another agreed, sharinga recommendation we heard several times: “Really liked this.  A little large, so had to share it.  Are there smaller figs in life?  However, it was delicious – and was thinking this would be a lovely gift in a box of 6 or so.” Again, we heard: “I think of this batch, the Hostess mint and the fig were my favorite (although as I said the fig was too large for one serving for me)” and “Chocolate figs were too big to eat comfortably. I would have liked a smaller version with creamier chocolate.

Others were less positive: “I decided to face my fears next, and try the Chocolate Fig. To be honest, I never have had a fig before, and I wasn’t sure what to expect. The chewiness of the fig was a challenge, as it made the Chocolate flake off with every bite. I’m sure that, historically speaking, this is right on the money. That being said, however, the texture of the fig combined with the Chocolate coming off and melting in my hand made this less than enjoyable” and “My least favorite was the chocolate fig.”

Our take-away: We can’t turn away from this candy for its rich historic value and flavor. Next step: we’ll try a smaller size fruit for the dipping.

We then asked out tasters if they had other thoughts. Here is what we got: “I have a favorite from childhood; but don’t have a name for either — they were purchased individually from a penny candy store. One was a small chocolate with a soft maple interior; the other a sort of “rice” cake; although I do wonder if that is what it really was made of. We kids would buy one of each, squash the maple candy onto the cake and pop it in our mouths all in one bite. Your store already carries many of my childhood’s favorites otherwise.”  Thanks! I’ve heard stories about the rice cake and will try to track it down. As for the maple…very interesting. I’ll ask our maple-maker!

This is interesting for us to hear: “I was curious as to the ingredients in the chocolates – such as is there corn syrup or do you label the original boxes with the chocolate of origin? I know many folks who are careful about the country of origin or company that they buy chocolates from because of child labor, processing or pesticides, etc.” A good point, but not what we do. Roughly 90% is made in the USA, overwhelmingly in small commercial kitchens. BUT – we look at history. Items such as corn syrup? A native North American sugar, used by the Native Americans in various forms. If you’re using processed sugar, why not corn? Country of origin? Mostly everything we eat originated elsewhere and in most cases, such as coffee and chocolate, grows far outside their natural environment. I get the point, though.

Here’s two more: “I used to love Cherry Mash as a kid but may find them too sweet now. I liked the Chunky bars, too. I grew up near a small candy store that made their own and loved their caramels and chocolates …. At St. Patrick’s Day he would make lime candy snakes and at Easter he would make sugar eggs with scenes inside.” Lime candy snakes! Wow! Finally, one taster commented: “I …want to try pulled creams and all the liqueur chocolates. I love maple candy (the real kind) too. It is fun to try things I have read about, like the Turkish Delight from Narnia. My sister-in-law brought some back from Turkey and it was great to satisfy curiosity.” We sell them right here. Online. Why wait?