I attended a talk on the history of chocolate at the historic Dumbarton House in D.C. The speaker, Joyce White, managed to cover a broad swath of history in 90 minutes with plenty of interesting facts. Here are a handful with a few of my own thrown in.

Baker’s Ads through the Ages

Baker’s Chocolate in the Industrial Revolution 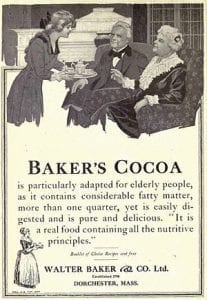 Good for the elderly? Really? 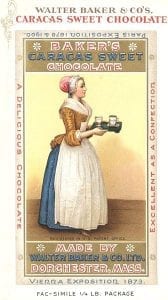 Baker’s Girl Based on 1700’s painting