A few weeks ago, I posted that History.com interviewed me via a number of written questions.The editor said I could share the full Candy Cane Q&A once the article, with my quotes, was released. She also said I need to give them credit…which, as you can imagine, is a pleasure.

What do you know about the origins of the candy cane?

The first candy cane most likely took shape in 17th century Europe when people were enjoying pulled sugars, the parent to today’s candy sticks. At that time, somewhere in Germany, an unknown person added a hook to the stick. Some believe that person was a choirmaster who gave the stick to fidgety choirboys to placate them during services: a more palatable form of enticement than the common mode of whacking them with a switch. The board complained – sweets were not appropriate at so solemn a place as church. So, the choirmaster added a hook, making the stick resemble a staff, a religious reference that would calm the board’s concerns. This story does have credibility, but it’s just as likely Germans added the hook to hang the sticks from trees, alongside cookies, fruits and other treats. Just about everyone agrees that today’s candy cane appeared in the U.S. around 1847 in Wooster Ohio, made by August Imgard, a German-Swedish immigrant.

I’ve read different accounts–that the “J” shape stands for Jesus, that they were made to look like a shepherds crook. What’s your opinion on the shape, and the red and white stripes?

The “J” had nothing to do with Jesus (sorry!). As mentioned, it was a representative of a Shepherd’s staff or more likely a hook to attach it to the tree. I believe the “J” was an urban legend, so to speak.  Similarly, the stripe appeared in the mid- to late-1800s as a decoration in candy sticks and canes…and barbershop poles! In other words, the stripe was the brainchild of marketing. Legends of stories about the candy cane abounded, such as it being a secret code among persecuted Christians in Germany or England in the seventeenth century (both were Christian nations at the time, so why be secret?); a secret language among the Christian faithful depending on the stripes (three stripes represented the trinity, one Jesus’ sacrifice); some kind of secret hand-shake, what exactly, I’m not sure; and the more general role of the stripe as the blood of Jesus.

Why do you think candy canes have endured all these years–in other words, why do we love them so much?

Early on, the cane’s popularity was limited as it tended to break when candy-makers added the crook. Bob McCormick, a candy-maker in the 1920s, reportedly solved that problem with help from a Catholic priest, Gregory Keller, who happened to be his brother. At that time, McCormick was losing 22 percent of his candy canes to breakage. So, Bob’s brother invented a machine that would automatically put a hook in the candy cane, leaving the stick intact. The machine was a success and today Bob’s Candies has become one of the world’s largest candy cane maker.  The candy cane is portable, relatively neat (compared to, say, chocolate) , affordable and tasty…all of which adds to it popularity. Besides, the candy cane’s presence on store shelves is limited – only one or to months – which enhances its value – and has positive associations.

By the way, “Rigby’s Reliable Candy Teacher,” published in 1919, offers this advice for avoiding breakage:

“Run out a batch of any flavor stick candy, usually peppermint and lemon are the best sellers, spin these sticks any size you wish and in cutting these cut off at angles. Now have your helper roll them so as to keep them round and when they begin to get cold crook the angle, then set them to one side to harden. Your helper’s rolling them until they become cold keeps them from getting flat on one side which affects the sale of them greatly. It is best when spinning these out to make one end of the stick smaller than the other, then place the crook on the large end and have the small end of the end of the cane. Candy canes can be made in any flavor or color, or any size desired.”

How did they become so associated with Christmas?

Most holiday candies – Christmas, Easter, and so on, are a product of marketing. In the early 1800s, for example, Christmas was celebrated with a meal. On the back of the Industrial Revolution came marketing:  food-makers started to create foods  people would enjoy for their own sake (not health or medicinal value, for example) – and tap marketing resources to get the word out. Existing candies were marketed as Christmas candy with slight variations. The festive art candy, for example, started on British seaside boardwalks with a picture of a hotel or resort on the candy, sold as souvenirs.

In the end, though, Christmas is about family, fun, and the warmth of ritual. The candy cane and others fits right in! 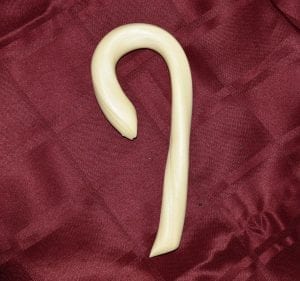 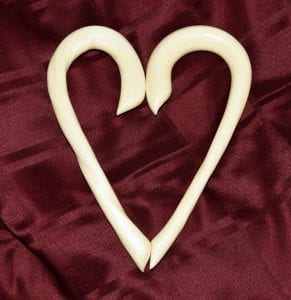 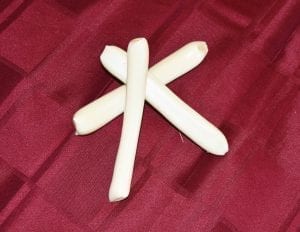 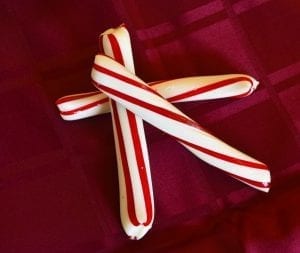